Welcome to the home of the 864 System project, an open-source tabletop role-playing game system!

Based on a random thought by halfminofarmer (@john_errwin), and a short but interesting discussion with Saice Shoop (@SaiceShoop), I decided to document the ideas being thrown around for using a d8/d6/d4 system as a replacement for 3d6. This sparked the creation of what is called the 864 RPG System, a set of simple RPG mechanics. The concept of adding and removing dice from actions appeals to me as an elegant mechanism. In the 864 System, the curve of probability changes dramatically as you lose or add dice.

We have created a consolidated version of the current rules used by games such as Peer Pressure and Dark Chrome! This version turns this into a generic, yet expandable system.

The base idea is that entities have abilities or skills that have three ratings: high, average, or low. A high ability rolls d8 + d6 + d4. Average, d8 + d6. Low, rolls only a d8. These are rolled against a target number of 8.

Nothing is final in the system for now, and it’s open to contribution from anyone that might want to be part of this. This is a non-profit, open project, that will explore the possibilities in this simple yet elegant system as we create, define, and shape it into a complete ruleset.

In its open-source spirit, we have a GitHub repository with the documents. Feel free to create an account there and create your own branch and documents!

864 is a two-page, universal system designed to be lightweight but still crunchy.

The overall feel is very math-y / engineer-y, but it's not hard to grok, and it feels like it would be simple and fun to mod it into a more specific engine.

HP is 8, and attacks can wipe that out in a single hit, but consequences don't kick in until -4. Combat is simple, involves an action per character, and centers around passing rolls to hit.

Overall, I'm not certain whether 864 is easier to pick up than other short, crunchy unisystems. If you don't want to mod the game as you go, the core experience seems a bit swingy, and you'd be relying on the GM to make approaches other than just rolling for damage viable in combat. However, I think 864 might appeal specifically to designers as a foundation to be expanded on and customized. Tinker with it slightly, and I think you'll very easily get a game that fits your group, which is a cool niche. Pick it up if you get the chance to.

-Attributes costing twice as much as skills and being able to penalize rolls at the GM's discretion feels like it's better for players not to have them. Maybe when they incur a penalty, the player generates a point of a resource?

Thank you for your comments! Very insightful. As this is a work in progress, I will be looking at your suggestions and integrating them into the system.  As you stated, this is a basic, core platform, and the idea is to have people grab this and make their own stuff. Anything that facilitates this in terms of rules is definitely welcome! 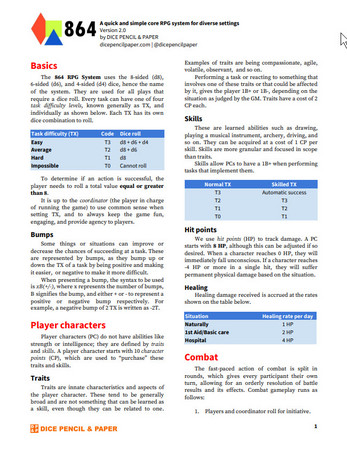 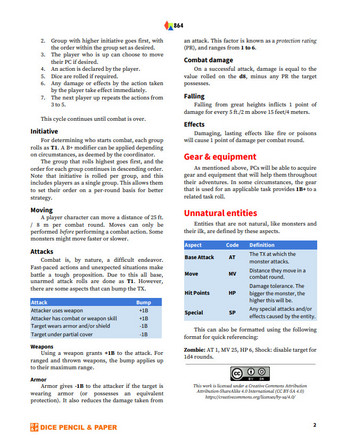